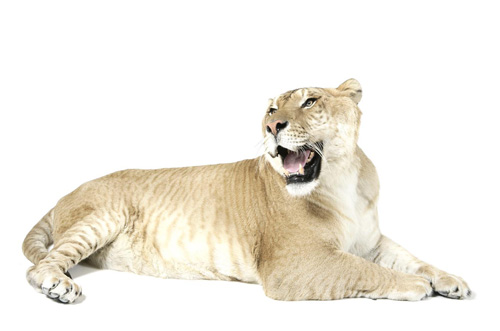 The tendency of hybrid offspring to exhibit characteristics that are superior to either of the parents is known as Heterosis or Hybrid Vigor. This is what occurs in ligers. Ligers are bigger than both their parents - lions and tigers. Like another much more common hybrid species, mules, which are bigger than both of their parents - horses and donkeys.

The application of heterosis has been one of the most important contributions of genetics to scientific agriculture in providing high-yielding hybrids in plants and in livestock.

In the wild, hybridization and the evolution of species are ongoing processes. There is a great deal of research being conducted to study the impact of hybrids in wild species' populations. Here in the U. S. there is extensive field research studying the hybridization of the Pecos pupfish - an indigenous species and the Sheepshead minnow, which is an introduced non-native species.

The naturally occurring hybrid offspring of these two separate species exhibit hybrid vigor, which makes them more successful at survival than their parent species. As a result in a rather short amount of time, the hybrids are replacing both species of parent fish in their natural habitat.

There is a continuing debate in the scientific community as to the overall negative or positive effects of the hybrids on the populations of both species in particular and on their environment in general. Whether we understand it or not, this is simply one example of a current evolutionary event involving hybrids and heterosis occurring in the wild.

Ligers capture people's attention with their enormous size and impressive physical appearance. Something indefinable but powerful is gained in a personal encounter with these magnificent cats. The experience is truly remarkable and often transformational. People find themselves understanding global environmental issues with a new awareness.

Ligers, as animal ambassadors, have helped us raise hundreds of thousands of dollars, which go directly to support successful, innovative international conservation and preservation programs for tigers, cheetahs, orangutans and other critically endangered species worldwide.

No one right way exists for conservation models.

Captive breeding programs as well as the sustainable management of wild species as renewable resources must be considered in any discussion of the preservation of critically endangered species.

Many conservation programs around the world have been, and continue to be, failures. They are short sighted, underfunded, poorly managed and lack the sustainability to carry them into the next century.

Do not be fooled into thinking that conservation traditions that have so often failed are the right way. There is no one right way to do anything. Wildlife will only survive with a million Noah's and a million arks!

For over 25 years as a conservation educator I have reached millions of people through live shows and tens of millions via television. In my experience, the most effective teaching tool is watching big wild animals like ligers, tigers, cheetahs, elephants, chimpanzees and orangutans interacting in a personal way with their handlers and friends. It puts a personal face on the impersonal statistics of worldwide species destruction. People then become willing to learn about the increasing global issues and possible solutions to save our planet's bio diversity.

Humans are the dominant species on the planet. Everything we do impacts every other species of animal and plant that share it with us. It is our responsibility to REDUCE our consumption, REUSE all that we can and RENEW all the rest. Or the animals will disappear and we will follow close behind.